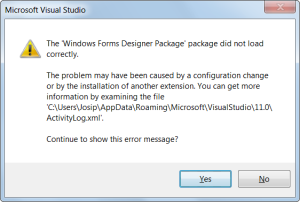 On clean installation of Windows 8 I had issues with Visual Studio 2012 being completely broken. Almost every day I had to deal with following messages (just an excerpt):

I blamed Windows 8 and it is probably best for all that I never killed anybody given how close I live to Microsoft headquarters.

I installed clean Windows 7 and same problems started again. Visual Studio would work for a while and then it would stop. Repair would fix everything but things would break soon enough. To make things more confusing, another (virtual boot) Windows 7 installation on same machine had Visual Studio 2012 that had no issues at all. So I went into task of comparing everything.

SQL Server team is my newest hate target these days. Not because of this VS 2010 shell issue but because they make uninstall extremely annoying. It consists of at least 15 different components (approximate figure, I was to annoyed to count) and I can only compare procedure to removing malware. And that is broken for quite a few versions now. If they can make single installer, why is single uninstaller impossible task?