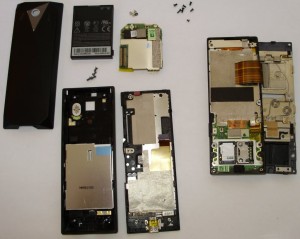 Due to “careful” behavior toward my HTC S740, screen was broken and I needed to replace it. First step was ordering new screen from eBay.

There is quite a few replacement screens available so that should not be a problem. If you do not have tools be sure to get one with free tools included (case opener, T4 and small Phillips-head screwdriver). Although there are quite a few sets with triangle shaped case opener, I personally went for thin and flat opening tool. It makes job much easier.

Take off battery cover, battery, unscrew four T4 screws behind keyboard and then use case opener tool. Jam it on top ridge of keyboard and circle around it gently. This is probably most difficult part since keyboard will keep sliding back inside.

Disconnect two ZIF cables (top-left and bottom-right) and one antenna cable (bottom-left) from board and gently pull up board. It is held by four pieces of plastic and there is another flat cable behind so be very gentle. Pull backside flat cable out of it’s socket and put whole module on side.

There are four Phillips screws holding keyboard and screen part together. Unscrew them and you will be able to put them apart. This will give you access to screen’s part of assembly.

It is held together by five little T4 screws and one Phillips screw (behind keyboard slider mechanism). Once you unscrew them and open case with case opener, you should arrive to same situation as depicted on picture above.

What you see is metal shield behind yet another four Phillips screws. Once you unscrew it, just pull out metal shield (take care of flat cable and button connector above). Camera and volume buttons will fall out itself – just do not lose them. Little bit of stronger tap on the back of screen should be enough to kick it on phone’s front side (notice yet another flat cable). Throughly clean points where screen was held by tape (all of it should be gone).

I could have used double-side adhesive tape to glue new screen in same place, but I opted for cyanoacrylate instead. Put a drop of it at four red-dotted locations and quickly put screen on it. Hold it together for minute or so in order to allow enough time for glue to activate.

After you are sure that everything is as it should be (watch keyboard alignment and tryout all keys), just put everything back in same order.

[2010-03-14: You can now download all pictures I took. Unfortunately they are not step-by-step instructions but they might prove to be useful.]

23 thoughts to “How to Replace Broken Screen on HTC S740”